The City of Bahawalpur 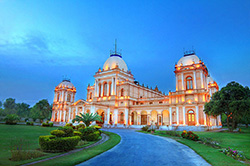 Bahawalpur, the 12th largest city of Pakistan and an important city of southern Punjab is famous for its tranquility, cultural heritage and educational institutions. It was once the capital of former princely state of Bahawalpur, founded by Nawab Bahawal Khan Abbasi II. This remained an autonomous state for over 200 years. During the rule of last Nawab Sir Sadiq Muhammad Khan Abbasi V, the state acceded to Pakistan on 07 October, 1947 and merged into the Punjab on 14 October, 1954.

Bahawalpur enjoys an extremely important strategic location owing to the vast Cholistan desert which serves as a natural boundary between Pakistan and India. Being an agricultural area, Bahawalpur city serves as a center of marketing in south Punjab. The annual Jeep Rally is most splendid sport activity that draws tourist not only from the country but from other parts of the world. Bahawalpur Zoological Garden, The Dring Stadium and SS World recreational park make the city an attraction for the neighboring areas. The Quid-e-Medical College Bahawalpur, The Islamia University of Bahawalpur and no doubt GSCWU have made the city a great center of education in the southern Punjab. Central library housing hundreds of thousands of books with its up-to-date children complex and newspaper section is a priceless asset of the city. In its proximity Bahawalpur Museum presents the history of the culture of Bahawalpur in antiquity. Bahawalpur is a city of palaces. A number of superb palaces like Noor Mahal, Gulzar Mahal, Darbar Mahal and Sadiq Garh Palace add to the beauty of the city. Lal Sohanra National Park, a wild life sanctuary, with its Lion safari and Dear Safari is the large safari park in the South Asia. The city has the distinction to have the currently established Quaid-e-Azam Solar Park which is the very first utility scale solar power plant in the country.